In December, 2017, a group of current and former defenders together from the Public Defender Association for the District of Columbia, Defender Association of Philadelphia, Still She Rises, The Bronx Defenders, Legal Aid Justice Center, Harden & Pinckney, and Towson University convened to conceptualize the structure and met with leaders from the African American Project Directors Association (AAPDA), a group of Black civil legal service leaders within NLADA. A one year deadline was established for the creation of the Black Public Defender Association (BPDA), and the goal was realized only eleven months later in November 2018. Following the initial planning meeting, a working group was formed and met monthly after work hours to develop the structure, bylaws, mission, and membership requirements for BPDA. After nearly one year of hard work, BPDA officially launched as a new membership section of NLADA in Houston, Texas on November 2, 2018.

The Black Public Defender Association aims to improve the quality of defense provided to low-income communities across the United States by creating and maintaining a national network of skilled Black public defenders that identify with and are committed to the populations they serve.

The creation of the Black Public Defender Association is based on the recognition that creating and maintaining a national network of skilled Black public defenders who identify with and come from the communities most disproportionally impacted by the criminal legal system is necessary to fight against and end mass incarceration.

April Frazier Camara, Chair of BPDA, talks about the ideas behind the creation of Black Public Defender Association. 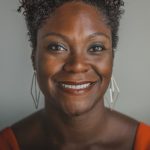 ‘This work is so urgent’: A new association to develop and support Black public defenders

James was a public defender for nearly eight years, in the Bronx and in Tulsa, Oklahoma, and is now the director of community justice at the Sargent Shriver National Center on Poverty Law in Chicago. She spoke with the Daily Appeal about the vision behind the Black Public Defender Association and the work it seeks to do.

This interview had been lightly edited and condensed for clarity.

What is the Black Public Defender Association? What led to its founding?

A little bit over a year ago, April [Frazier Camara] and I had a conversation about the need for an organization that is dedicated to the development and recruitment, retention, and support of Black public defenders. Both of us in our work as public defenders saw that there are just not enough Black defenders. The offices that do have them and historically have had them have a hard time keeping Black defenders.

We look at our work as part of a larger movement, a movement of decarceration, a movement of racial and social justice. But so often when we look at who’s telling the story it’s not those who have been directly impacted and it’s not usually Black people who are telling and leading the stories and the movement. And we think that is a misstep.

The other piece of it is, the people we are serving are majority Black and brown and in many jurisdictions majority Black. But yet we are not represented in the courtroom. Where you often do see people of color in many of these offices are on the support staff level, and that is fine, but we should also be in these other positions.

It’s part of who is being recruited, being given the opportunity to interview, and who is ultimately hired. Once they’re hired it’s about how long they’re staying. And that can be complicated: It could be salary issues, it could be I just don’t want to live in this city anymore, life changes. And in some offices there is very much a glass ceiling for Black advocates and attorneys.

Who is BPDA for?

We have a very expansive definition of defender and the language we’ve been using is anyone who aids the defense function. If we are really trying to push for decarceration, to end the oversurveillance of Black communities, to dismantle the prison system, it’s not just the trial attorneys. This is for the investigator at the public defender office, for the social worker and the mitigation specialists. This is for the civil rights attorneys, for folks who work in policy, for civil defenders, and for folks in academia. We don’t view the defense function as just the folks that are in court today. It takes all of us in this movement.

This for law students and college students. We want to create a pipeline so they know you can enter this profession, you can make a living, you can do meaningful work that is respected, and there is career growth within this profession. We are still combating the narrative of the public defender that you’re doing this because you couldn’t get a job, or you’re not as smart as someone who works at a firm, you couldn’t cut it at those places so now you’re doing this work. We need folks to know that is not true and that you can make a life doing this.

Did you have a community like this that supported you?

I had a brother that was incarcerated and so grew up going to the prison with my mom to visit him. I always knew this was something that was important to me. I knew from age 12 that our criminal legal system was racist and extremely punitive. But I didn’t really know what to do with that. I thought I was going to be a social worker. Then I had a professor say I think you should go to law school. Even when I was in law school, I was like yeah, I don’t know, I have no idea, maybe I’ll go work at a firm or hang up a shingle.

I ended up doing a moot court competition and our coach was David Singleton. He is executive director of the Ohio Justice & Policy Center but he was also an attorney at PDS [the Public Defender Service of the District of Columbia] and he started talking to me about public defense. But for David I don’t know that I would be a public defender. I didn’t know any public defenders before law school. I didn’t know any lawyers. Law school was something I had to figure out on my own.

David started talking to me about PDS, and he actually sent me bios of former PDS folks and where they are now and all the amazing things they are doing. I credit him a lot for opening my eyes to what is possible in this profession. I don’t think I would’ve gotten to the Bronx Defenders without David. Here I have this Harvard Law grad talking to me about being a public defender. I never thought that someone from Harvard would end up as a public defender. Little did I know how common it actually is.

I didn’t graduate from law school that long ago, so I know there are many people like me who just have no idea that this is even an option.

How has the landscape around decarceration and racial justice shifted in the past decade?

Think of how many philanthropic organizations are funding initiatives around the country that impact or effect advocacy around criminal justice reform in some way. There are so many folks, universities that are doing this work and it’s amazing and it’s great. I definitely think this is work that has been amplified in the last 10 years for sure.

Is public defense and allied work on the minds of Black college students and Black law students more because of that? What’s your advice to them?

Absolutely. I think probably the tipping point being Trayvon Martin’s murder. I mean there have been tons of young folks involved in Black Lives Matter and Black Youth Project 100, out there mobilizing and activating their peers around social and racial justice. We have to capitalize on their energy, on their momentum because they are what’s next. They are going to carry on the work that you and I are doing now.

I don’t know if I have easy advice. The general answer would be find a mentor, find someone who’s doing this work and try to latch on to them. I think that’s easier said than done. What I can say is that BPDA has been created with them in mind and for this reason. We are a resource for those students who are saying I think I want to do this, I know I want to do this, what do I need to do?

And my advice to Black lawyers would be—this is my advice for myself—is to keep growing. And to know that you as an individual, you have range. You don’t just have to be trial lawyer. You can also teach. If you’re a great trial attorney I bet there are some skill sets you can share. Why don’t you share that? Why don’t you apply for that adjunct professor position? Don’t get so caught up in thinking I am good at this one thing.

I want to circle back to something you’ve been talking about since the beginning, which is about narratives and just the fact that so often the voices telling the stories aren’t Black voices. What is lost because of that?

I also think it’s important that people in Black communities see Black people working for and advocating for their communities. It’s reaffirming, it is comforting, it’s empowering and impactful to see someone from your community engaged in collective freedom building. You’re less likely to look over community when it is your community. You are more likely to listen to those voices, to include those voices.

And there’s more of a sense of urgency, right? This work is so urgent to me because these are my people. There are few courtrooms where I can’t walk in and look around and see someone who could be my cousin, my nephew, my brother, my aunt, my sister.

I think it’s important to have that sense of urgency in this work that is just inherent when it is your people.

What else should we know about BPDA’s goals?

The long-term goal is to transform the face and narratives of mass incarceration, I think, and to do it in collaboration with some of the amazing grassroots organizations that have been doing this work. One of the things I was thinking about in the creation of this is the number of Black-led organizations that are underfunded. Or that are in the community already doing the work just to see a very well-funded organization come in and duplicate their efforts and arguably have greater success because of how well-funded they are. We definitely want to work with, uplift, carry on, amplify some of the messages that have been made for years and just haven’t had the traction because they haven’t had the platform.

A short-term goal is definitely to get the word out about us. To really begin to build power through our membership. We have a professional development committee, training committee, and membership committee. We want to begin helping folks develop and supporting them.